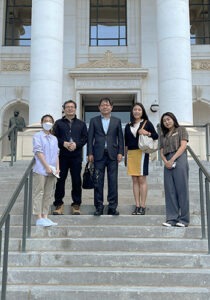 The Office for Global Engagement enjoyed a visit from the Korean Consul General in June.

Yoon Sang-su, Korean Consulate General of the Republic of Korea in San Francisco, and Political Consul Kim Hyun-jung traveled to Utah to join Jeongbok (David) Lee, Consular Agent of the Republic of Korea in the State of Utah. The three Korean representatives met with Dr. Sabine Klahr, Associate Chief Global Officer, and Dr. Randy McCrillis, Executive Director for the U Asia Campus.

The meeting underscored the U’s connection to South Korea, given the location of the U Asia Campus in Incheon, and spoke to opportunities for collaborations in the future.

“It was a distinct pleasure to host Consul General Yoon Sang-su and to discuss the University’s numerous and deep ties to South Korea, including the U Asia Campus, partnerships with the most distinguished South Korean higher education institutions, and the research and scholarship collaborations of our faculty with counterparts in South Korea,” said Klahr.

The Consulate of the Republic of Korea in San Francisco plans to host an event focused on “K-Culture in Utah” on October 7, which will include music performances, Korean cuisine, and a screening of Minari. The highly-acclaimed film was nominated for several Academy Awards, including “Best Director” for former U Asia Campus faculty member Lee Isaac Chung, MFA ’04. Additional details will be announced as the event nears.

Chloe Hong and Suhyeon Seong, both former U Asia Campus students now studying in Salt Lake, gave the delegation a tour of the Salt Lake City campus. “This visit provided a unique opportunity for our students to participate in diplomacy. It was also great for the representatives to hear the perspectives of students who had studied both in South Korea and the U.S.” said McCrillis.